The elephant has been getting terribly cramped, so it's new room time! (The elephant is still pretty cramped...I haven't finished reorganizing things. Also...it may be yet another new room time soon...) New room, means new corset to match: 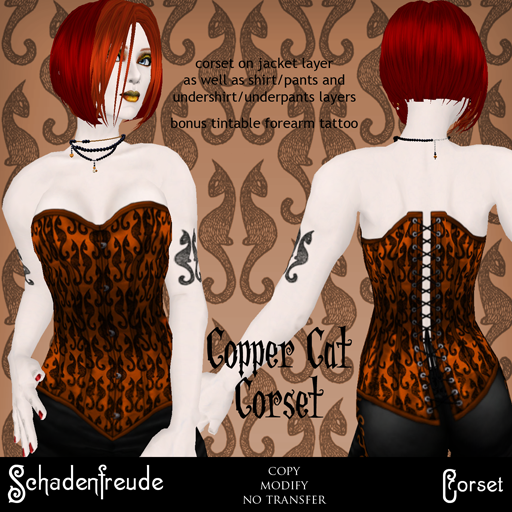 p.s. Obviously not _forearm_ tattoo, but upper arm tattoo. But, I haven't been getting enough sleep and tomorrow is yet another early morning, so I'll try to remember to fix that later, whoops.

Once it's been out for a bit, it'll be moving into its room, as the rest of them have.

New ties as well, the one to match the new corset, and the Sparrow corset, and 3 other motifs- Erzulie was an old group gift, but gained the second in the pair and has been rereleased following people requesting it lately; Leo was seen in Joe the Lion and is finally ready to go. In separate pairs with each motif, and a HUD controlled fatpack of the set. 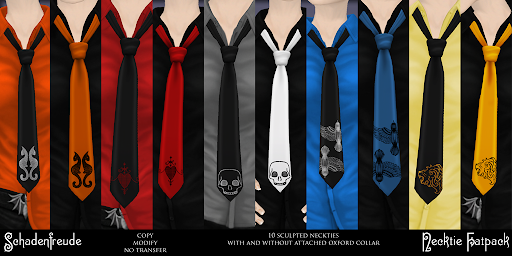 And another set of ties, these with spiderwebs in an assortment of colours. These totally slipped my mind...but _I_, at least, will wear spiderweb covered ties all year round, so that's ok. 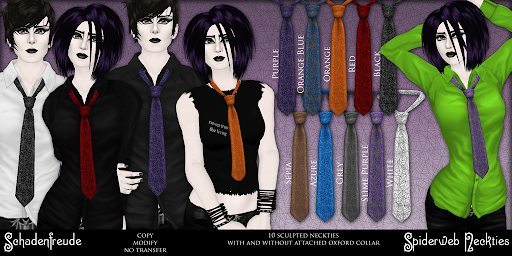 All out in the still overstuffed elephant, who will be shedding his wings...soon.
Posted by Allegory Malaprop at 2:25 AM