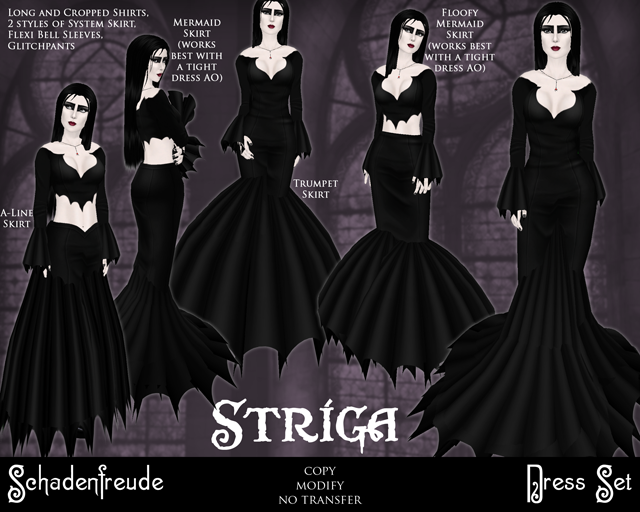 (soon to be released, cross fingers, hair; Langwidere Siouxsie skin; Arachnophobia I necklace; not that you can see my shoes but I'm wearing the Batwing Lucents under there; and of course retired Silver Screen eyes by Miriel. poses are mostly by Luth, the one on the right side is by Curio Obscura)

A slinky slinky skirt with batwing scallops and a plunging neckline, Striga was originally going to be part of last year's Strix. They both stand on their own, although they share some motifs, and Strix was already getting...unmanageable, and then there were all the extra things I wanted to do with this part...and thus, so either ever actually got done, I set aside the sketches of extra pieces that became this set to do later (besides, Striga does have a different tone really).

The shirt comes in long (on the jacket layer, ending in a bit of a front point) and cropped with batwing edging, with flexi batwinged bell sleeves. The system skirt comes in two waist- "natural" waist, and a lower pointed dip front with a finished edge. And then there are a bunch of flexi skirts with different shapes.

The mermaid skirts have the sad limitation in SL of requiring a special AO to really work well (however...when I wear a skirt like that in RL, I automatically get the matching AO, as the skirt says "oh no, I don't think so, you're moving like this now, deal with it")- I personally adore the tight dress AO from Curio Obscura. It comes with 5 stands (one of which I used in the ad, in fact!), 5 walks (the hop is my absolute fav, but the rest are fantastic as well), and is otherwise fully loaded as well- swims, turns, flying, jumps, and everything. If you spring for the fully loaded AO, it also comes in an AO set up for you that automatically swims in Linden water and randomly cycles through the walks and stands, as well as the separate animations, plus free dresses! (The hardest part, I think, was choosing which dresses to get with it. I did not choose what you probably think I did.)

Yes, I know I sound like a spokesperson for Curio Obscura, but seriously, this AO rocks!

Striga is at the elephant, of course.
Posted by Allegory Malaprop at 7:23 PM