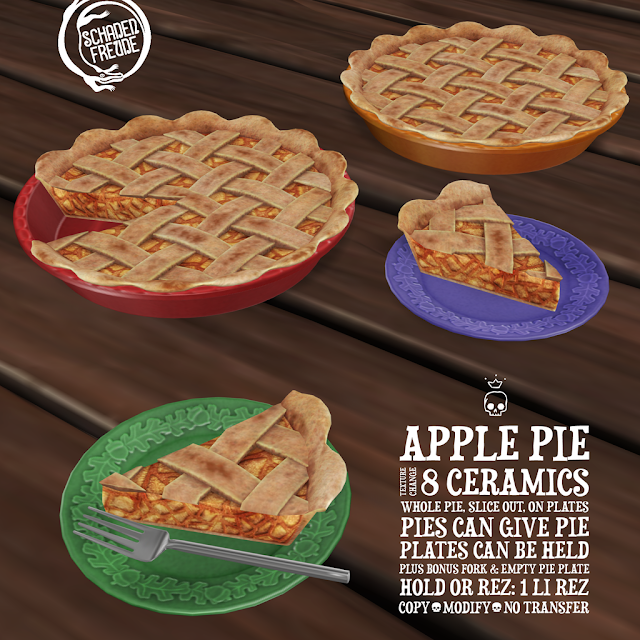 Pies at Collabor88!   Apple and pecan, each pie comes with a whole pie, a pie missing a slice, an empty pie pan, a plate with a piece of pie, a plate with a piece of pie and a fork, and a separate fork.  Texture scripted for 8 embossed ceramic colours, includes versions of the plates and the fork to hold, and versions of the whole and slice missing pies that will give pie to those who touch it. 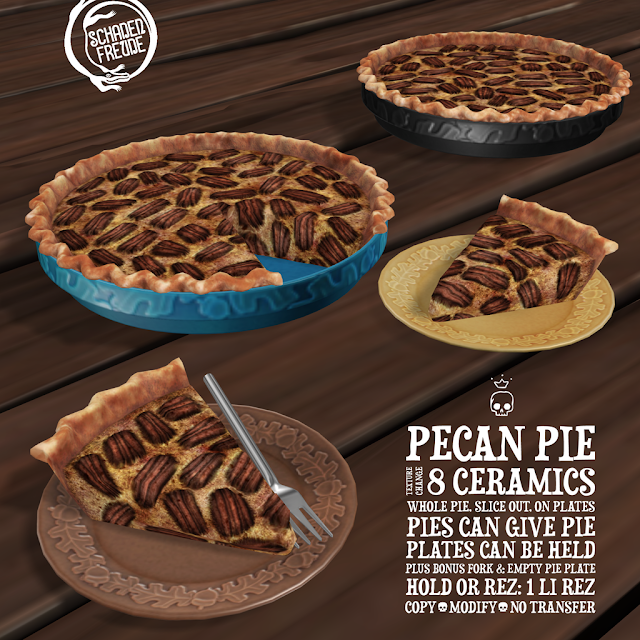 I've never made an apple pie- apple pie was never big in my family so I haven't even eaten many of them.  Now, pecan pie, on the other hand...

My mother's recipe for pecan pie:

pie shell of your choice: We cheat in my house, and use Pillsbury premade pie crusts.  The refrigerated one that you roll out, comes in a pack of 2 so you have an excuse for a second pie.  Making pie crusts is a lot of work, and these are pretty decent, so you know, more time to make more pies this way.

Mix everything together: it's easiest to mix them without the pecans first, then add pecans and then mix those in too.

If you have an electric oven:
Preheat the oven to 450
Lower heat to 375 when you put the pie in
Cook for 45 minutes

At this Collabor88, until December 6! 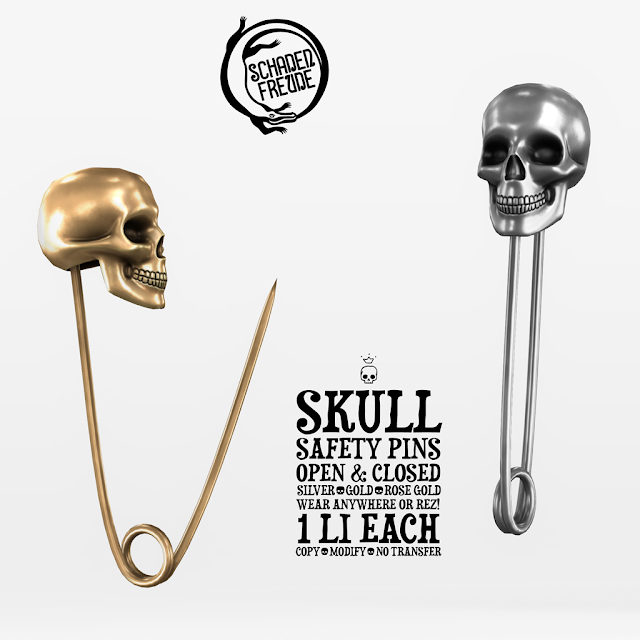 Safety pins with skull closures, in silver, gold, and rose gold at RITUAL.  There are just safety pins, open and closed; Meoli (머리) earrings that don't have the loop so they are easier to wear, and Dugae(두개) necklace with a large safety pin on a chain.  Just safety pins and earrings have larger bounding boxes so they don't have to be as big as they come and can be scaled down quite a bit if you prefer. 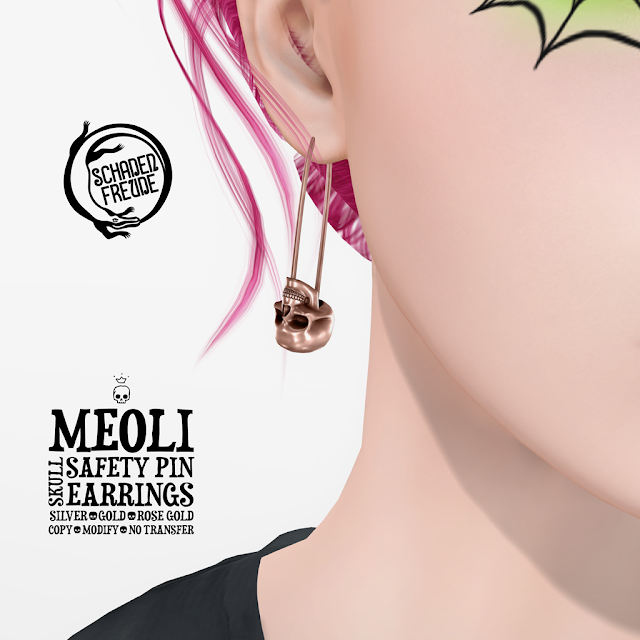 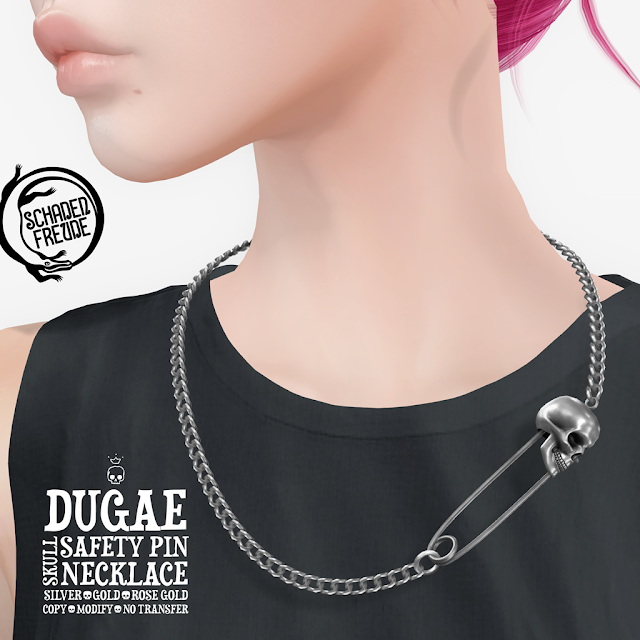 Schadenfreude Halloween Cupcakes at the Syndicate

My last Halloween event of the year is the Crypt Crawl held by Second Life Syndicate.  It is an event in two parts: Part 1 near the headquarters is a sale event, I have a few things for sale, and the last treat bucket of the season awaits you there!  So many buckets this year. 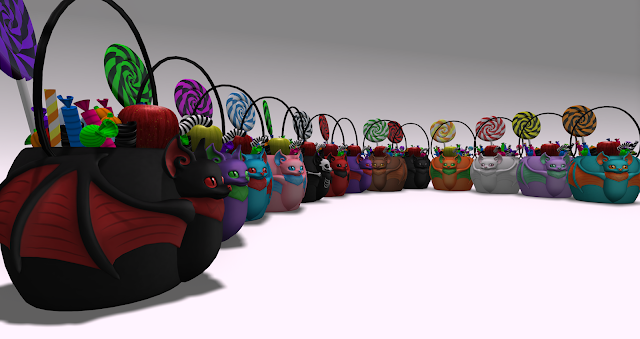 There is also a hunt, where you can look for 4 candles from me.  Two candles hold cupcakes: 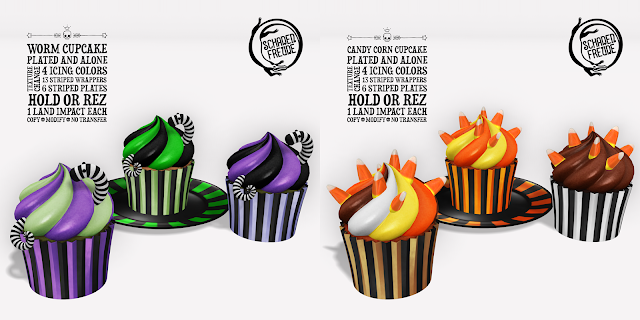 And there are two other ~mystery~ candles to find!

At SL Syndicate until November 6! 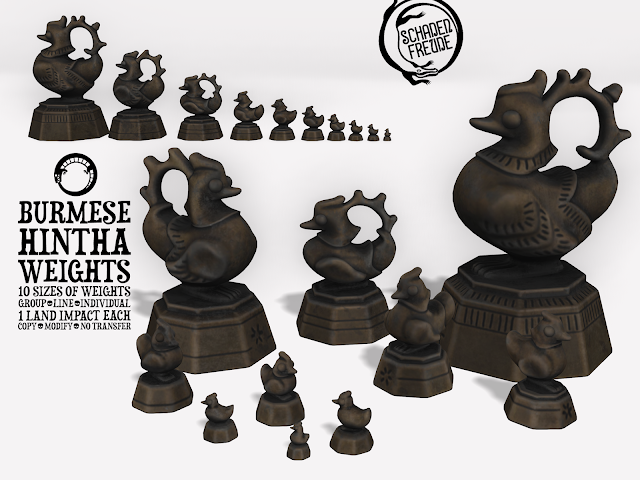 Bird shaped weights for ORIENTILIKA!  There are 10 weights in the set, each as an individual object, and 2 groups of all of them as one piece- one set lined up showing off the graduating sizes, one set clustered.  Each object is 1LI at realistic weight size (they are small).

These are know to the tourists (at least the English speaking ones) as "opium weights", though they were just...weights.  I fell for it (sort of): they were marketing souvenir repro sets of the tiny ones as such when I was in Thailand.  I wasn't looking at "real" antiques and they were obviously new tourist sets, but they were cute so I got some elephants, and I love them.

In reality though, animal shaped weights, mostly cast in bronze, were traditionally used in the region known as Burma (currently Myanmar) and some of the surrounds, to weigh everything you needed to weigh.  Why use a boring plain weight when you can use something beautiful?  They were designed to be highly accurate, so even though they look intricate they were still effective to weigh whatever you were measuring.  After the British conquered Burma in 1885 (ahem the East India Trading Company wanted something), they were phased out for boring plain round iron weights, and that's a shame.

This is a traditional set of 10 weights, from 1 viss (~1600 grams) at the largest size, to 1/8 tical at the smallest.  1 viss = 100 tical, so the 1 viss weight is the largest, the second size is 50 tical.  Aside from the largest weight, the rest are listed in tical (~16 grams)- the smallest size is 1/8 tical, which is also 1 mu (~2 grams).  The units were also known as peithha for viss and kyattha for tical (the currency of Myanmar is the kyat)- as well as assorted other regional names (the kyat was the bhat in Thailand, the originator of the name for their currency as well).  The largest three (1 viss, 50 tical, 20 tical) have decorative handles that would have made them easier to use.  Each king introduced his own standard set of weights, so the weight did fluctuate at times- for older weights to be continued to be used, they had to be adjusted to the current standard for the time.  Myanmar continued using their units of measurement into the 21st century, but they have been gradually switching to the metric system.

The hintha bird system was a popular shape for the weights: you may be more familiar with it under its name as the hamsa bird, of the Buddhist religion.

At ORIENTILIKA until the end of November 7 Japan time (November 7 at 8am SLT). 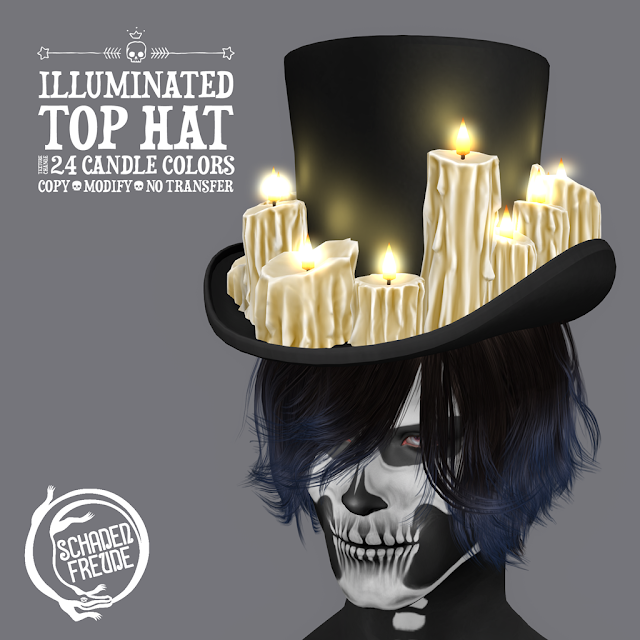 A top hat with candles on its brim awaits you at Hallow Manor!   Candles are texture change (up to three different colours can be mixed at one, at semi random), and all will light up or extinguish on touch (or they won't, if you prefer- there are always lit, only owner can control lights, and anyone can control lights versions included).

Hallow Manor is also holding its yearly hunt!  You buy access to the prizes, and then choose what you want (hunting for keys first optional).  My prize is a takeaway box full of eyeballs, with and without chopsticks sticking out, that can be held or rezzed.  The box comes in red, white, and black, and the eyeballs can be brown, green, or blue- or a mix of any two. 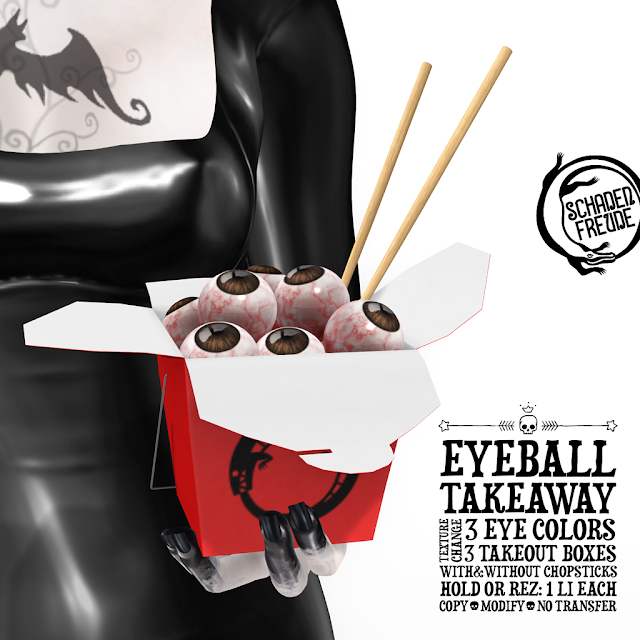 At Hallow Manor until November 1. 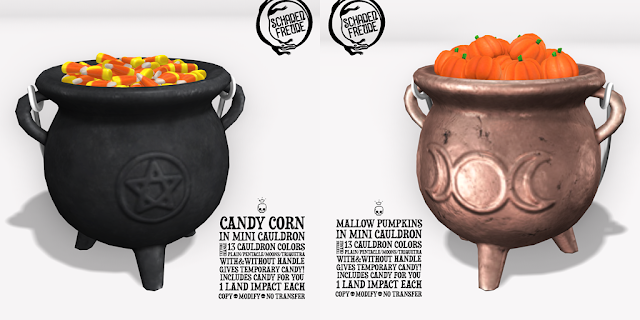 Posted by Allegory Malaprop at 12:41 AM 0 comments

Panic of Pumpkin in Okinawa has started!  I've been breeding giant snails.  1 LI each at human skull size, static little dudes.  You can hold a couple of dwarf snails (a little smaller because they are awkward at full size!) with you as well. 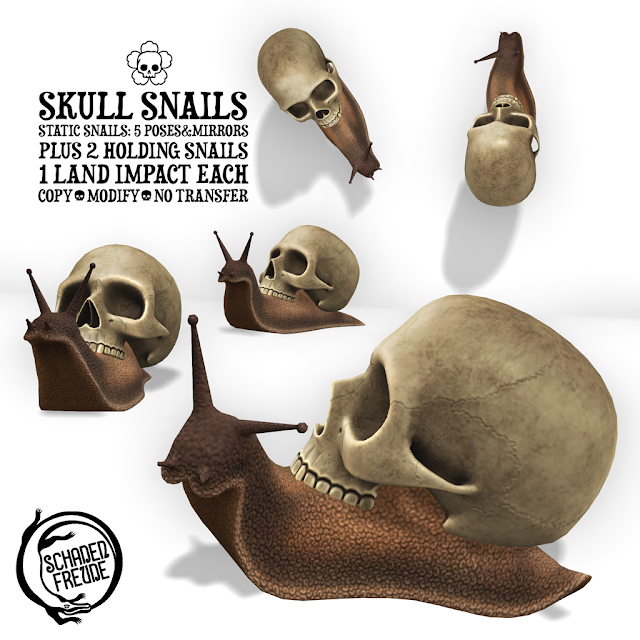 They also have the daily advent again this year- every day (starting at 8am SLT) new doors are holding gifts for you!  When my door opens, you will find a wreath, made of skulls.  The snails have moved on into new ones, these are the rejects. 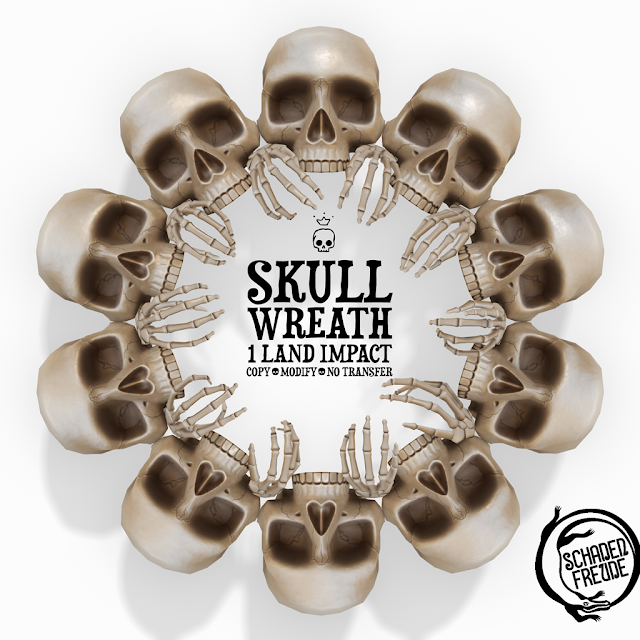 At Panic of Pumpkin, until the end of the month!